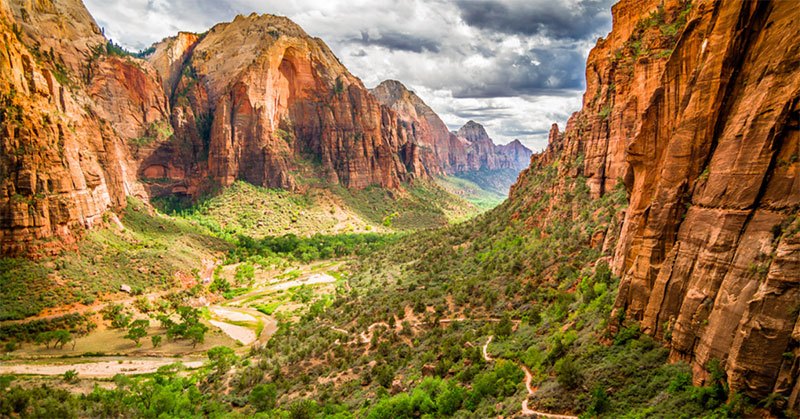 Given the sad state of affairs today (read: the government not getting its act together and shutting down (?!?)) I wanted to share some love from my camping trip this past weekend at Zion National Park. Considering national park employees are not going into work today, I’d say I had pretty good timing.

I’m not going to get into the ridiculousness of this situation right now, but rather share some of the beauty that I found in Utah. Zion, the Hebrew word for redemption, is exactly that. In Jewish mysticism, Zion is interpreted as the spiritual point at which reality emerges.

And since I’m reading this book and just watched this movie– I’d say the gigantic sandstone cliffs parted by rough waters forming the largest slot canyon in the world were certainly a good dose of reality in the most natural form.

I was lucky enough to go to Zion with three wonderful women from my fellowship, one of whom used to work at the park and was able to give us the local insider information- like where to find a secluded swimming hole in the dry heat of Utah.

The weekend at Zion was simply incredible. And as I hiked around, first to Angel’s Landing- a steep 1400 ft. cliff that juts into the middle of the canyon and as the park described “unsuitable for those fearful of heights“, and then through the Narrows, I felt a sense of serenity that was missing for a long time. Its just incredible how being in the vastness of nature can make you feel so small.

When thinking about what to eat on this glorious trip, I admit, I had little input. One thing I did know was that of a recent package I received from Peanut Butter & Co, I would have to bring along a jar of peanut bar. I decided on Mighty Maple, and so glad I did.

We ended up finishing the entire jar in the first day by adding it to our morning oatmeal, making copious amounts of PB&J sandwiches, and just straight up eating it out of the jar. I met one of PB+Co’s reps at the Blog Her Food Conference this past summer and was so happy when they reached out to me about trying some of their vegan, gluten-free and non-GMO peanut butter.

While PB was HUGE when I was living in Nepal, I haven’t really eaten much of it in the past year. Let’s face it, Israeli’s love Bamba, but they don’t love Peanut Butter. It’s one of those paradoxes that we may never solve.

In any case, the peanut butter was a huge success and definitely a new staple for any camping trips. If you find yourself going on a trip, I would definitely suggest bringing along a jar of one these really delicious jars of peanut butter. Then again, that trip may have to wait awhile…